Child identification program sponsored by the Masonic Grand Lodge of Canada in the Province of Ontario working with regional and national law enforcement agencies.

Select a district from the list below to view any upcoming events in that area. If an event is scheduled, it's primary community will be displayed.

The MasoniChIP process created its 25,000th personal ID kit at approximately 10:45 AM on Saturday, November 7, 2009, at Childreach, an Ontario Early Years Centre in  London. 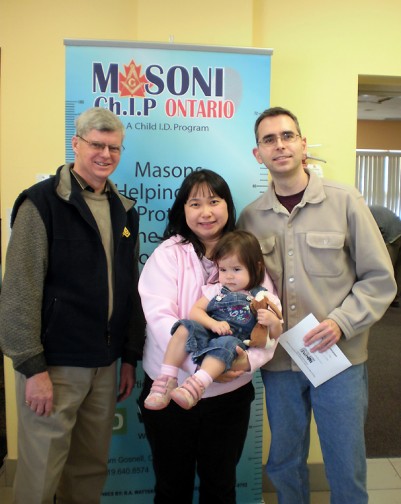 The kit was created for Lianna who is 1½ years old.  Lianna's parents Jason and Nancy, also from London, had many positive comments related to the process used to create their child's ID kit.  First, they expressed their gratitude towards the volunteers for the valuable service they provide and the friendly manner they exhibited towards their child during the various stages of the process.  Also, they were pleased that at the beginning of the process, the workstation volunteers confirmed the confidentiality of their data and that the data would be erased from the workstation at the end of the process.  They were also impressed with the "high tech" equipment used in the various steps and the short period of time that was needed to create the comprehensive ID package for their child.